This short report is very much my own reflection of the event as CD and F4C Flight Judge.

The 2017 Scale Nats. were memorable because we were blessed with three days of warm sunny weather, which is really quite unusual for August BH at Barkston and hasn’t happened for a long time now. OK the wind was a little variable and a little gusty on the Monday, but of no real concern.

Entries in all three R/C classes were a little lower than in recent years but from an organisational point of view this made for a more relaxed event and without the need for delays and cancelled rounds due to bad weather, which made it all the more enjoyable for me.

Thanks to my reliable team of volunteers I actually found time to watch some of the flying and chat to some of the spectators. The only hiccup to the flying programme was a medical emergency in the team racing area which stopped flying whilst the air ambulance dropped in to take a heart attack victim to hospital. The unfortunate victim has I understand made a good recovery, but I was impressed by the speed at which all flying across all disciplines was stopped in just a few minutes, following the alarm from central control. This illustrates just how good the BMFA is at organising large model flying events, something we can be justifiably proud of.

Regrettably I did not manage to pay a visit to the Scale Control Line circle, but under Brian Cordwell’s stewardship the small but devoted band of Scale C/L fliers also made the best of the good weather.

What seems likely now to have been a ‘one off’ Open FF scale flying only event provided evening entertainment for the FF supporters, but I suspect this may not be repeated at the 2018 Nats. because of the likely return of the FF Championship events to the August BH weekend.  (Editor’s note, the Scale FF Nats will be held at Barkston Heath during the August Nats weekend)

The results have already been published as have several well illustrated, nay ‘glowing’ reports of the R/C Scale Nats in the modelling press, so I do not intend to repeat them here, other than to congratulate the winners and thank all the competitors for their sportsmanship. 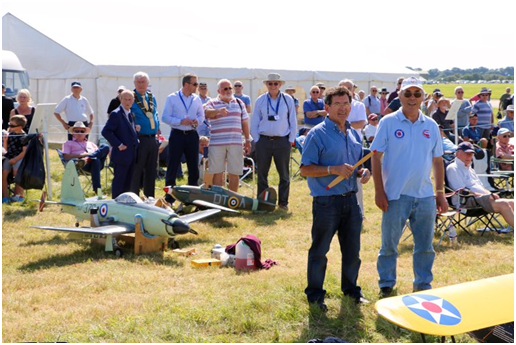 From the R/C scale point of view, the Nats site layout is now I believe, about as good as it can get. The risk of being overflown by pylon racers is considerably less than from the showline and as a result much safer. We also have the trade area, with the caterers and refreshments right behind us. It now behoves us to ensure that we keep within our allotted airspace and there is clearly a problem using signalling flags. To avoid the flag marshals being in a danger area places them outside of the pilots and judges sightline, who are of course keeping their eyes on the model. What is needed is an audible warning which can be clearly heard by pilots and judges and the options for doing this are currently under consideration. Hopefully we will have something better in place for the 2018 Nats.

The Scale Nationals will of course not happen at all without those who give their time and skills to help run it. My usually fumbling attempts to thank them at the podium ceremony on the Monday afternoon are really less than adequate acknowledgement for their efforts and anyway there is only a small audience at these ceremonies, because most scale supporters are packing up and preparing to face the Bank Holliday traffic.

This newsletter does however provide the opportunity, if somewhat belated, to recognise these individuals and to place on record my sincere thanks.

Thanks also to those Competitors who offered their services as flag marshalls and to those who arrived early to help set up the flight line and those who stayed on to help take it down.

I hope to see you all at Barkston in the sunshine next August.