The Great Britain Radio Control Aerobatic Association welcomes you again to the BMFA British National Championships at RAF Barkston Heath. Now in our 40th year of organising F3A aerobatics on behalf of the BMFA.

F3A aerobatics has rules and aerobatic schedules which are recognised all over the world.  Our models must fit into a 2 metre by 2 metre box, you may have heard reference to 2 metre models.  The weight of our aircraft is limited to 5 kilograms weighed without fuel if IC, or with batteries if electric powered.  We are often asked what model a club flyer needs to enter one of our competitions.  Any aircraft that will do a loop and a roll is capable of competing at our entry level to fly our Clubman Schedule.  At the top level of competition there has always been a quest to find the perfect model.  Aircraft are specially designed and trimmed to fly smoothly in all attitudes of flight and the majority are now powered by electric motors of around 2.75 Kilowatts using lithium polymer 10 cell batteries with a maximum of 42.56 volts, some with contra rotating propellers. Others prefer to follow the 8 times F3A World Champion, Christophe Paysant-Le Roux (France) and use the latest YS200 internal combustion 4 stroke, supercharged, fuel injected engine, with spark ignition, running on 20 to 30% of nitromethane in the methanol mix of fuel.  Whichever is used they are expected to pass the FAI sound code of 94dba at 3 metres. 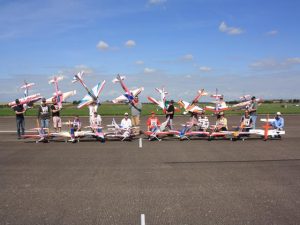 The Fédération Aéronautique Internationale (FAI) who are the World Air Sports Federation, change the top schedules, the FAI Advanced, (adopted as our Masters schedule) Preliminary and Final schedules every two years.  For this year we will be flying the Preliminary (P-19) and Final (F-19). These schedules are also flown at the European and World Championships which are held in alternative years and at World Cup League events around Europe.  F3A is a truly international sport and these schedules are being flown at clubs and competitions all over the world.

The GBRCAA hold three team selection events each year open to all pilots who wish to compete for a team place to represent the UK the following year. As I write this article we have completed two of the three qualification competitions this year to select the GBR Team to compete at the European Championships to be held in Spain in 2020. The competition this weekend will be third qualifying event.  Great Britain were represented at this year’s World Championships in Italy by Matt Hoyland and Kevin Caton.

All the GBRCAA schedules (Clubman, Intermediate, and Masters) are designed to help members progress with their flying and compete at their own level of ability at competitions held most weekends around the country, those competing to be BMFA Nationals and British Champion here this weekend will fly the FAI Preliminary and Finals schedules. We expect to be flying all the schedules this weekend for league points and promotion, and for some pilots this will be their first BMFA National Championships, we wish them a particularly successful weekend and hope they leave their nerves behind when they take up their position to fly on the main runway.

What to look for on our flight line on the main runway.  First of all, if you have any questions please ask and we will do our best to answer them, we have no secrets.  We are all attempting to fly perfect shapes, perfectly straight lines with perfect axial rolls and to do this our aircraft may be home built in the traditional way from balsa wood or they may be professionally built using balsa and many composite materials finished with film or tissue and paint. You will see canalisers mounted on the top of the fuselage used to smooth the airflow over the rudder and tail plane and airbrakes to slow the model in down lines and may be contra rotating propellers. 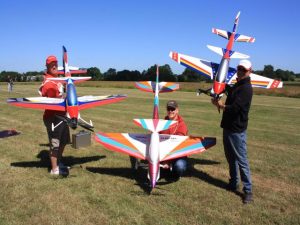 Everyone you will see over the weekend on the F3A flight line will be well practised and trying their hardest to impress the judges and hopefully yourself. The judges are seated about 8 metres behind the pilot who stands at the centre of a 120 degree V marked out on the runway and by markers at 150 metres out which indicate the ‘aerobatic box’. This line 150 metres out from the runway is parallel to the runway and if a model is flown deeper than this or outside the 120 degree lines which are projected to the horizon they will face stiff downgrades from the judges for any manoeuvres which infringe the limits.

Please come and visit us during your nationals visit and take a look at the models and we hope to provide the usual informative commentary whist the aircraft are flying to explain the finer points of F3A flying and give an understanding of what the judges are looking for.

From the FAI class through to the clubman class we all look forward to seeing you.  Above all enjoy your time at RAF Barkston Heath and I hope you are inspired by what you see.

If you wish to join our Association please talk to any of our pilots, it is just £25 per year.  For more information see our web site www.gbrcaa.org